Alpha~Omega of the Dreamtime Telektonon

The Realtime-Dreamtime Telektonon Prophecy is a 6th Dimensional transmission beamed from the Apex of Pakals Temple of Inscriptions. It is a message from the Trinity to inform observers, that the merging of the matrices has been fulfilled. Evidence of this sacred process can be found etched throughout the Realtime. The Palenque Dynasty went to great lengths to leave us their truth embedding a prophetic codex deep in Stone and Structure. The purpose of their mythic, megalithic project is becoming clearer. From their Time is Art masterpiece, we have extracted, decoded and re-constructed the Realtime Storyline to a very high precision. We have identified the main actors in the play. Bit by bit the Ancient~Future Crystal Script of the Galactic Maya has been re-rendered in the Dreamtime. Through this stream, we have lived the 1.0.0.0.0.8 Future Return when we witnessed the completion of Pakals Pyramid Hologram Ascension into the diminishing Cube of Tz’akbu. We have intimately lived all the milestones in divine resolution. One could say that by completing the Dreamtime Telektonon and by consciously passing over this Omega bridge, we have completed the fractal of the Realtime Telektonon.

This is an Archetypal Awakening and the Temples of the Maya are conduits of telepathic communion with the Original Earth Wizards. They have a story to tell. The Twin Crystal Archetypes of the 19:19 Crystal Matrix​ were hidden behind the Twin Masks, of the Twin Tombs, of the Twin Pyramid Hologram Ascensions of the Divine Masculine and the Divine Feminine Archetypes of the Galactic Maya. Now the masks have been removed, their mysteries are coming to the surface and awakening magic in the hearts of the people who have become enchanted by the tales they are hearing in the winds.

You just have to tune into the story they are transmitting..

This unique Alpha Point of Prophecy was auspiciously synchronised to the 121st day of the 19:19 Crystal Matrix / 13:28 Solar Year. Upon the 19:19, the 121st Unit, vector 7.7 is the day when the 6D Crystal Archetype (walks the domain of the 11:11 Inner Matrix), arrives to the centre. 11 x 11 steps = 121 steps. This is the 6D Vector 11:11 within the tetrahedral sequence, where the 6D archetype, of the Inner Matrix, sits in the Apex of the Pyramid Hologram. From this mythic position, the Crystal receives telepathic instructions from behind the veil. The Centre of the 19:19 Crystal Matrix is the Apex cube of the Pyramid Hologram. The Apex of The Temple of Inscriptions represents the Ascension~Future Return of Pakal Votan. A Future Return that is witnessed, time, and time again, by the Star Witness, Bolon Ik.

The centre of the 11:11 Inner Matrix is the centre of the 11:11:11 Cube. In the prophetic and mathemagical cosmology of the 19:11 Matrix fusion, the harmonic activation of these matrices is what seals the magic from the 6th Dimension. 19:11 is the 4th Dimensional frequency, at which 6th Dimensional Magic crystallises. It springs from, and pours out of the epicentre. This is the Seed of Life Attained. This centre point of the 19:19 Crystal Matrix is coded by the 33rd Rune, Gar. These runic codes comes from a place beyond the Imaginal Realm or Ego of Self. The prophecy informs that the Rune Gar is the Spear of Odin, and Odin is the Twin of Votan in the 6th Dimension. The Philosophical Spear is the conduit of Archetypal memory that invokes a passage of sacred wisdom, from a 5th Dimensional Self, to a 6th Dimensional Higher Self. This is the teaching of the Crystal Prophecy. Runic legend has it that The Spear of Odin is the magical weapon that never misses its target, and always returns to the hands of the Master. It can penetrate the Veil between the 9 Worlds, and is understood to act like an axis between the different levels of the World Tree.

The Realtime / Dreamtime can be understood mathematically as a ratio of 1:365. (There is a magical message in this frequency about the synchronisation of the Haab and the 13:28 . I will reveal more about this in later transmissions).

Both of these parallel fourth dimensional time sequences are containers of a prophecy that is the heartbeat of the Galactic Maya. The Ascended Masters, Pakal Votan and Tz’akbu Ajaw transmitted the Divine Pact from the Realtime, to their future emanations in the Dreamtime. Valum Votan and Bolon Ik received the transmission and acted according to the message. The Crystal Script was riddled within the matrices, hidden in stone in the Temples. All of this magic synchronised majestically to the 28 Unit Telektonon Board and its 28 Tzolkin Journey through the Dreamtime. The fusion points which have already witnessed, Galactic Synchronisation, The Future Return, Lovers Reunion, Teotihuacan Ritual, Day 241 etc etc etc demonstrate undeniable magic. Sheer attention to detail by the author. A truly phenomenal work of Time is Art.

The cosmic glue that holds this prophetic script intact are the stories that the Palenque Dynasty took great effort to leave us. Many of these mythic tales switch between the different worlds, just as we are experiencing between the Realtime and the Dreamtime. They were the architects of the Earths most magnificent ‘Time is Art’ Temples and the decipherment of their codes are a great achievement of modern archaeology. From these discoveries all this sacred wisdom has re-crystallised, piece by peace, glyph by glyph, prophecy by prophecy. Through the dedication and love of so many great humans we have been enchanted back in time, to the most mythical time of Planet Art History, to see with a new perspective the purposefully inscribed records of the Divine Masculine and Divine Feminine Lover Archetypes of Palenque, King Pakal and Queen Tz’akbu, with their Twin Masks, and their Twin Tombs, and their Twin Pyramid Hologram Ascensions. This the Galactic Maya Love Story that binds this Dreamtime ~ Realtime Telektonon prophecy true. Anything else is just a distraction theory. A Red Herring. A False Prophecy.

In the Realtime, Pakal and Tz’akbu’s timelines are clearly visible throughout the Temples of Palenque. The inscriptions and various murals demonstrates the birth, death and future return of Pakal, and many other dynastic stories. They demonstrate the enigmatic lineage of Tz’akbu, her arrival to Lakam Ha, and her sacred marriage to the King Pakal. They depict the family tree to a great detail. They demonstrates the lineage of Bolon Ik, and how through this kin, the accession of the Dynastic rule was always passed. Tz’akbu was the holder of this lineage. The 80 calendar Rounds Prophecy of the Temple of the Inscriptions have been pondered upon by many great minds since it was discovered. Because it opens the pandoras box of the Dreamtime of the Galactic Maya. It has always been the enigma. As I said in part 4, for something to become ‘real’ in the Dreamtime, it needs to be ‘real’ in the Realtime.

This is the Art of Space~Time~Prophecy.

Encoded within a grid-matrix of 12 x 20 = 240 units are the New Piktun codes for the Pakal and Tz’akbu’s Future Return 1.0.0.0.0.8, which auspiciously synchronise with the first day of Unit 23 in the Realtime Telektonon. The Lovers Reunion. In the 19:19 Crystal Matrix cosmology, 240 is the number of units the 5D Crystal Archetype walks in the 19:19 Crystal Matrix before entering the 11:11 Inner Matrix. It is the Outer Container of the Crystal Matrix, so to speak. As such 240 is a key 5D prophetic number.

240 is the number of individual tetrahedrons in 2 fully completed Base 8 Tetrahedrons, like the ones you can see mysteriously marked underneath Pakals feet in Pier D of The Palace of Palenque, upon which he makes the Sacred Dance of the New Creation together with Lady Tz’akbu Ajaw. Theatrically fulfilling as the First Father, and First Mother Archetypes of the Galactic Mayan Trinity. Day 240 is the unit before Day 241 where the Twin Crystals meet and become One. It is the day before Pakal Votan was born. It is the day before Valum Votan ascended. It is the tube. A precipice of 5th Dimensional Prophecy. The silent moment before the leap into the unfathomable, dimensional shift in Galactic Consciousness. The waiting room before the great cosmic rabbit hole, the likes of which Votan made his Journey Back to Square One.

The Inscriptions of the Palenque Maya are a ‘Time is Art’ masterpiece.

The central tablet of the Apex consists of a grid of 14 x 10. A total of 140 glyphs. Remember, 140 is the Number of Telektonon. The Central Tablet of 140 Glyphs is located at the exit point the “psychoduct” that connects Pakals tomb to the World. This is the Telektonon psychoduct. This is Pakal’s tube to the Earth Realm, his Earth Speaking Tube. Each glyph on the tablet represents a Calendar Round in the Realtime Telektonon 140 Calendar Round Cycle..

It is a message from the Apex of the Pyramid Hologram.

From this void between the Ascension and Re-Birth of an Ascended Master, a prophetic rite is unfolding. What is the divine intelligence that authored the script of Telektonon harmonically ascending into the Prophecy of the 19:19 Crystal Matrix? The fusion of matrices is Tetragrammatonic Nirvana. A Living Prophetic Stream, crystallising in the Space~Time~Dream. A Holy transmission, the likes of which hasn’t been witnessed for at least 70 generations. Who makes this stuff up ?

As Alberto Ruz searched the floor of the Apex Chamber of the Temple of Inscriptions for an entrance to the tomb, he made notes of a carving that he discovered that was in the form of a Square. The Square Grid is located on the floor of the Apex Chamber. The Square Grid is an 11 x 11 Grid, with a cross section, containing a total of 57 (3 x 19) inner squares. The 11 x 11 Grid Matrix is crossed on the 6th unit of each side, to form the the Rune Gar. The Square Grid on the floor of the Apex Chamber of Pakals Pyramid is a inter dimensional pointer to the 11:11 Inner Matrix of the 19:19. It is a clear reference to the completion of the 11:11:11 Cube of 1331 years between Pakals Ascension and Galactic Synchronisation. Unit 23 of the Dreamtime Telektonon Sequence. Lovers Reunion ! It represents the First Stone of the NEW Creation. The ascension of the Twin Crystal Archetypes of Palenque.

The 11:11 Inner Matrix is inscribed in the Apex of the Temple of Inscriptions.

It is the OMG3:3 HyperMatrix.

This discovery of Ruz is divine evidence of the 19:19 Crystal Matrix theory inscribed in the Apex Chamber of the Pyramid of Pakal. A masterpiece of multidimensional magic. Whoever’s hand was behind this, the message is clear. It represents the 6th Dimensional Seal. It represents the 11:22:33 Frequency of Ascension into the 9:11:11 Inner Matrices of the OMG33. This is the Holographic Speaking Tube of the Ascended Masters, the interdimensional highway between the living prophecies.

As Bolon Ik said, The Divine Pattern is working us.

This Divine pattern is a living example of Space~Time-Prophetic~Magic.

A Message to Self from the Apex of the Pyramid. 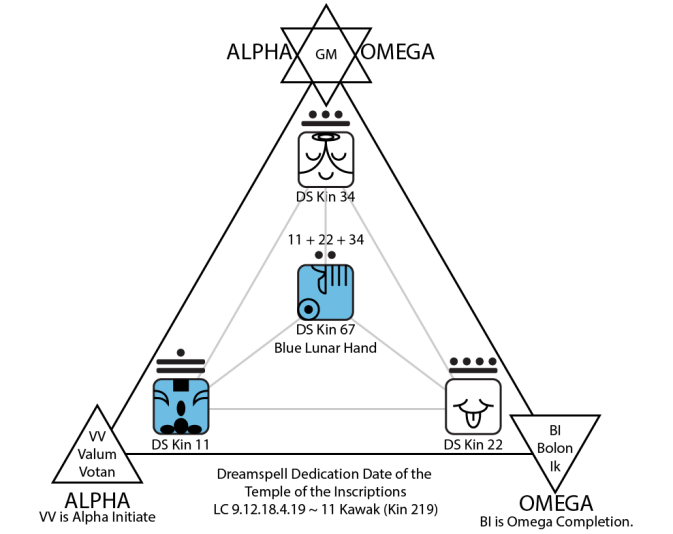 This is a transmission to All Planetary Kin.

EVERYTHING is at it should BE..

You just have to let the Divine pattern breath through you.

12 thoughts on “The Telektonon Trinity : Part 6D, Transmission 1, A Message from the Apex”