This is a quick blog, I will return and re-edit it at some point. I feel to release now in order to keep the blog synchronised with the unfolding of the events. To “milestone” these important days. 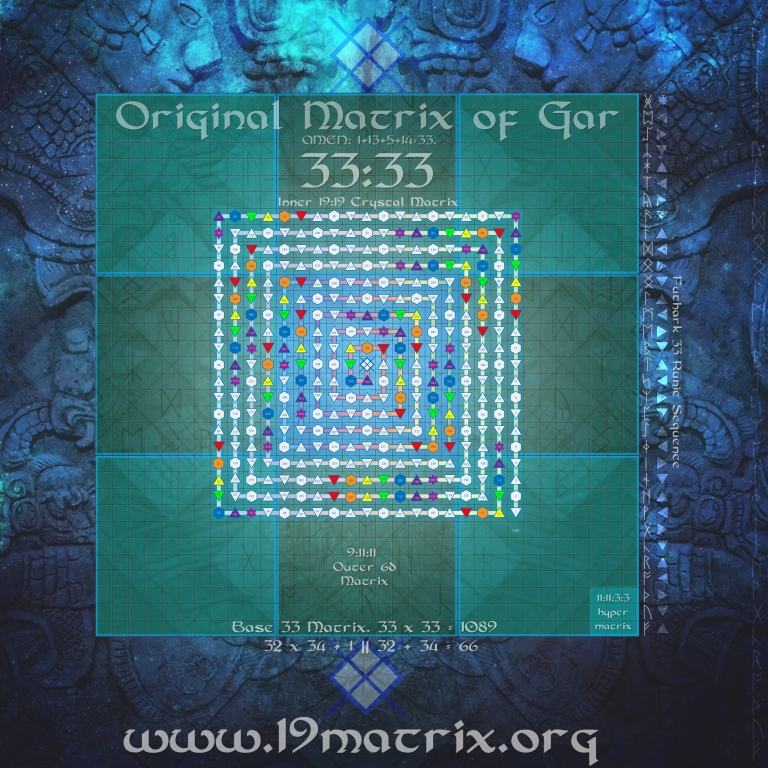 As I have demonstrated in this blog, the 1330 year Pyramid Hologram of Pakal, contained 1330 cubes. This was the exact amount years between Pakals ascension and Galactic Synchronisation. As the holographic pyramid was completed, we witnessed during the first year 2013-2014, that the 2 crystals of the matrix traversed the actual holographic pyramid, ascending on day 361, July 21st, 2014, New Earth Synchronisation. I’ve written loads about this so if you’re unsure about it, just go back in the blogs.

This implies that today, the 1089th day,  is the “New Earth Synchronisation” of the OMG 33 Pyramid Hologram. It is the day, the crystal ascends the pyramid.

The OMG33 Pyramid is constructed with 6545 cubes (see previous chapter for a breakdown of the levels count). We calculate the years by multiplying the number of cubes in the Pyramid by the 3 years it takes to complete the 1089 day journey.

This would imply that the initiation point of this particular time-cube pyramid construction would be July 26th, 17,621BC.  17621BC-2013AD

We calculate the number of tube years for the OMG Pyramid by multiplying the 17 levels of the pyramid x 3 solar years it takes to complete the 1089 days. The OMG tube is therefore 51 years in length. 1962-2013.

Ascending the OMG33 Pyramid, we enter into the apex cube, the 17th level of the Pyramid.

Another one I must add to the trophy cabinet! and explains clearly why the rune Gar has immense importance in all of this.

Valum Votan defined the “stream” of wisdom he received as codenamed GM108x. The source of this is The Arcturus Probe and it is riddled throughout his work.

108 as the Self Existing Star
The Kin Signature of Yellow Self-Existing Star is 108 This kin is intimately linked with the Great Star of Arcturus, Guardian of the Great Bear. It is from this association that the ASP received it’s name. 108 is the Shield Glyph of the Arcturans.
“Memnosis, who cast the oracle, who spoke it’s truth, drew the rune. Lamat, the Star was the rune.” The Arcturus Probe

I Define in order to Beautify
Measuring Art
I seal the Store of Elegance
With the Self-Existing tone of Form
I am guided by the power of Flowering
I am a galactic activation portal . . . enter me.

But what if the stream was playing tricks with the monkey?   What if the frequency was actually 1089, not 108x ?

Why do todays journal numbers correlate the OMG 3:3 Hyper Matrix showing G8 as the ascendant master manifested on this 1089th day, of the OMG33 First Stone ?

Another dimensional shift to ponder upon?

Just maybe, the riddle is bigger than the one who passed the stone.

It is to be released 25.7.16 QuantumDOOT @ Avebury Stone Circle.

I’ll post link when it is on public sale, and ofcourse we shall be distributing it to brothers and sisters. It contains all this information I have delivered wrapped into a most beautiful Solar Journal to get you connected into the 19:19 Crystal Matrix, of time, prophecy, and magic. A spectral journey through the power of 19.

During the gathering in Avebury, I’ll be demonstrating the unique connection between the Temple, and the OMG33, 19:19 Crystal Matrix, and the 33rd rune of the Anglo Saxon Futhark, Gar.

But only for the ones, who walk the walk of Prophesy !

Much love to you all..